There's more to buying a bike than pointing and saying, "I'll take that one"

I decided to get Sammy a bike for his birthday (he's turning four next Saturday). Little did I know it would take a whole hour to pick out just the right one.

I went looking at bikes a couple days to see what was out there. I discovered there are more girl bikes than boy bikes, at least at the three stores I went to. I also acquainted myself with the different sizes and shapes. I figured a 16" bike is what I was looking for, giving him a some room to grow into. Now all I had to do was find a color, and voila, I'd be done.

WRONG. I took Sammy bike shopping tonight, and let me tell you, buying a bike is a lot different than buying a hot wheels (his current cool ride). The first thing I found out was that 16" was too small. It just fit him, and as tall as he is and as fast as he's growing, a 16" would not do. His knees came to just under the handle bars when his pedal was at the top of the rotation. We looked at 16" wheels with a longer frame, but that stretched him out too far.

So we moved up to an 18" wheel. There were several that we tried, but they just didn't fit him right. Some were too hard to pedal, on one the training wheels weren't even, others were too big, etc, etc. And then we found GOLDIE. It was the right shape frame and right size wheel, and Sammy loved it. When the salesman from Toys R Us pulled it off the rack, Sammy's eyes got big, and he said, "Wow! That's a COOL bike."  Heaven help me. He wanted a gold bike. If I could talk him into another bike, I would try my hardest. But honestly, this bike really was perfect in every way (except color). It was small enough to fit him but big enough for him to grow into. The frame was the correct length, and it was easy to pedal. The orange 16" bike that cramped his knees that he HAD to have 5 minutes ago was forgotten. This was it.

I was talking myself into actually buying him a $100 gold bike when the salesman said, "I don't know why we don't have more boys bikes out on the floor. Let me go see if we have anything similar to this in the back." :D  <---This is me grinning and begging the salesman to PLEASE go look. If I had to buy him a flashy, blingy gold bike I would, but in the end, I didn't have to. He came back out with a green bike in the same style made by the same company. And it was only $75 (score!). And it was on sale for one more day for $20 off (double score!). This bike was mine. I even paid the extra $10 to have them assemble it (which made my brother happy).

Here's a pic of Sammy on the gold bike. Now imagine the bike as a light (but masculine) grass green. Yep, this is gonna be one good birthday. 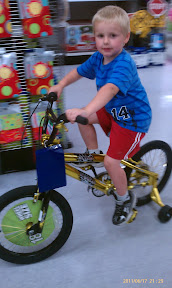 If it helps him enjoy brushing his teeth every night, I've got no problem with it.

Blogs are grouped by content and relationships. Only the 5 most recent in each group are shown. To see more, click "show all".