How to use nunchucks

Sammy teaches how to properly use nunchucks. More importantly, we learn their correct pronunciation...it's nunchuckles.

(The nunchucks are homemade from two soft blocks and a rubber band.)
at 7:40 PM No comments:

R2D2, Darth Vader, and a monkey walk out of a store

Sammy and I played Candyland this morning. The bad thing is that we've lost most of the cards. The good thing is that it ends quickly because 3 of 10 cards left are shortcut cards :) But I realized I didn't have any more games to play that were on in his level.  So we took a trip to the store where we picked up R2D2 in Trouble and Chutes & Ladders (the superhero version).

After *looking* at the Lego aisle (he LOVES legos, but it's amazing how expensive they are and he has TONS), we were walking past the stuffed animals when he said, "Oh! What's this?" And he went straight for...a pink monkey. I kid you not. A PINK monkey. It has long arms that velcro so it can hug you and a button to press in his chest that makes monkey sounds. And he wanted it. He wanted it bad. I diverted his attention to other stuffed animals. No go. I suggested we leave it on the shelf, and he said, "I'll just carry it around with me and take care of it."

We looked at the trucks (not interested), the guns (he has too many), and other toys, all with a pink monkey wrapped around his neck. He was getting impatient. "We need to go check out now!" Before we went to the register, I told him he could only get two things, so he had to chose between the R2D2 game (he also loves Star Wars...the PS3 game and star wars Legos...not really interested in the movies.), the super hero game, and the monkey.

(Aside) When we were looking at some of the board games, he wanted to get ones that were too complicated for him. He gets frustrated easily when he can't do something. You can guess what I said to him multiple times in the toy store by his response to choosing which toy to not buy. (Aside over) "I think I need to get the super hero game later, when I'm older so I'll know how to play it." Yep. He chose R2D2 and the pink monkey. The Chutes and Ladders game (which is well within his age range) was tossed aside.

As we walked up the register, they had bags with Barbie and Sponge Bob and other assorted characters, and he wanted one. I initially told him no (even though they were only $2), but then I saw a Lego Darth Vader one...so I bought him that too.

Here's Sammy with his prize monkey. He played with it all the way home. Ran into the house to show his dad. We've played hide and seek with it and they've jumped on the bed with it. It's his buddy. When we had to go somewhere in the afternoon, the monkey came too, along with the Darth Vader bag filled with his Ninja Turtles. Hey, whatever makes him happy, right? 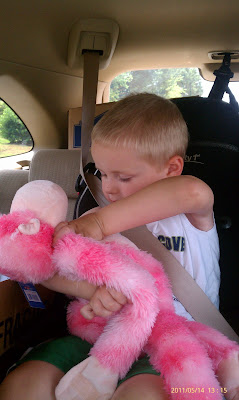 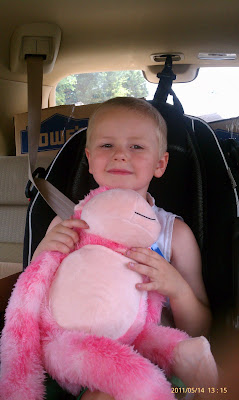 Email ThisBlogThis!Share to TwitterShare to FacebookShare to Pinterest
Labels: Sammy

One of my mother's cats died unexpectedly this afternoon. Whatever the cause, it came on suddenly. Within 24 hours of discovering he was sick, our sweet Spikey would leave us. Our pets are more than just animals. They're members of the family. We'll miss you Spike. 7/7/06 - 5/3/11

Blogs are grouped by content and relationships. Only the 5 most recent in each group are shown. To see more, click "show all".